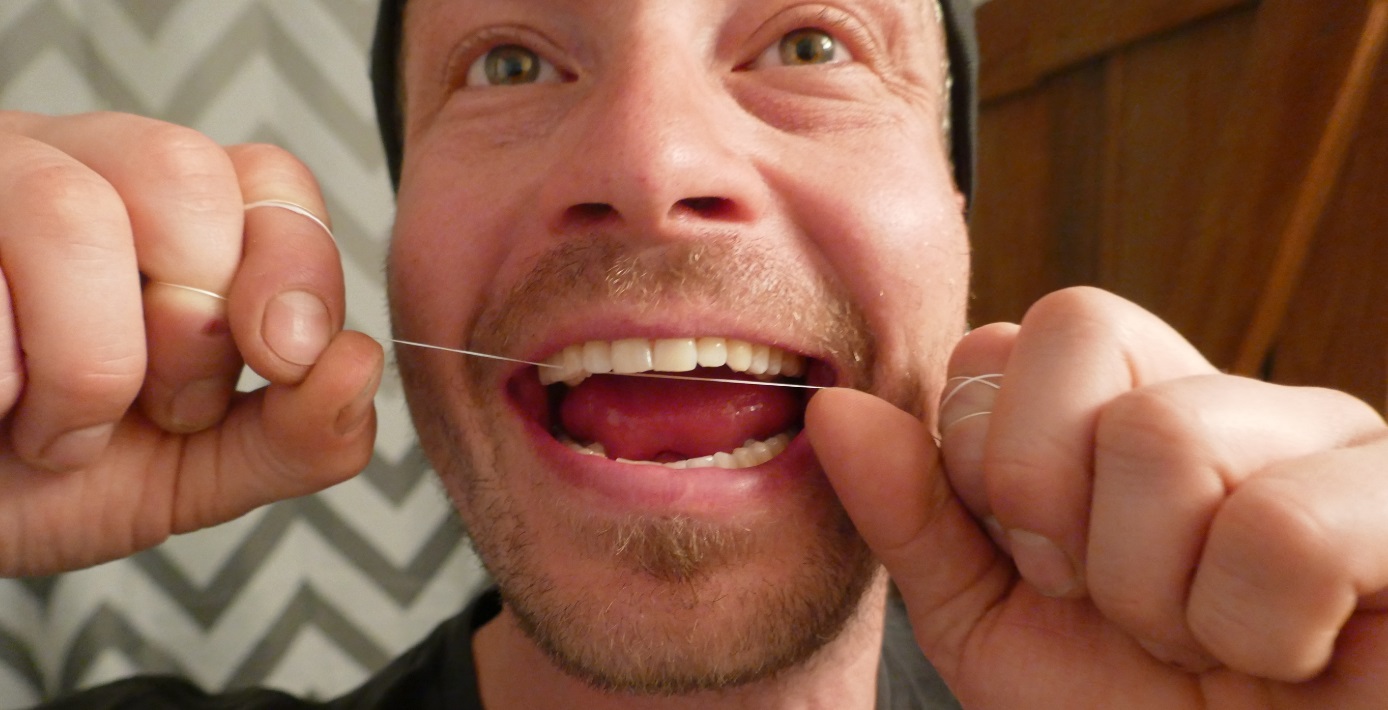 ‘Don’t be a savage’ is what well-mannered folks might say when they see their friends picking their teeth with business cards or any bits of paper handy on the table after a meaty dinner.  But Early Man didn’t have anything so fine as paper or thread. The best oral device that a savage could hope for was a sharp pointed hardwood splinter or fractured bone. Whoever came up with the idea of tooth floss?

The man credited with inventing tooth floss was an American dentist named Levi Spear Parmly who was a prolific traveler and writer of medical dentistry books.  It was Parmly who introduced the idea of using waxen silk thread as dental floss. That may not be the first-ever use, but it’s the first time the idea appears in print, in his book, A Practical Guide to the Management of Teeth.  In this text he stated that the silk thread should be run “through the interstices of the teeth… to dislodge that irritating matter which no brush can remove, and which is the real source of disease.”

Levi Spears Parmly, incidentally, also wrote Canada’s first dentistry book.  At some point in those two turbulent decades at the beginning of the 1800’s (there was a War in 1812 remember) he traveled from Vermont to Montreal, and after a short stay there he moved up river to Quebec City where he wrote and published the 65-page Summum Bonum in 1815.  The name is a Latin expression meaning “the highest good”, a Classical idea that was first introduced by the Roman philosopher Cicero. The book was published by John Nielson, a Scots-Quebecer politician and the editor of the newspaper La Gazette de Québec (The Quebec Gazette)  in what was then Lower Canada.

Although historians credit Parmly with the invention of modern dental floss, the first patent for dental floss was granted in 1874 to Asahel M. Shurtleff for An Improved Pocket Thread Carrier and Cutter that resembled modern floss packages.   Shurtleff was a partner in a Massachusetts medical devices company called Codman & Shurtleff which made and sold tooth floss comprised of unwaxed silk thread.  The business was not terrifically successful as dental floss didn’t become popular right away.  This medical supplies firm was acquired by Johnson & Johnson ninety years later in 1964.

What is modern dental floss?

Today we know dental floss as an impossibly strong cord nylon filament that’s used to remove food and dental plaque from between teeth in areas a toothbrush is unable to reach. Tooth floss is a relatively new medical product because there wasn’t suitable materials for widespread adoption until the invention of nylon thread. Ordinary household sewing thread (cotton thread) wasn’t strong enough to withstand the wear and tear of passing between teeth, and the stronger silk dental floss was hard to obtain in North America because it was a luxury item and too expensive to use as a utility textile. Plus the public demand wasn’t there yet. Training people to use tooth floss would take another half century.  In July 1898 Johnson & Johnson patented and marketed waxed silk floss in 12 and 24 yard spools. It was initially packaged in flat round metal containers, and then that evolved into more practical cylindrical tins that held a small amount of floss with a built-in sharp edge that allowed consumers to cut specific lengths, much like today.

Flossing teeth with nylon thread is the modern refinement of a very old idea. While we don’t know the exact beginnings of tooth flossing, but it looks like as long as food has been getting stuck in our teeth we’ve used some type of inter-dental cleaner. Discoveries have been made that suggest cleaning between teeth was practiced as early as the Prehistoric period.  The act of tooth flossing can be observed in higher primates living in nature, as more than one species of monkeys practice flossing. The phenomenon has been most prominently observed in Thailand where Long-tailed macaque monkeys have been known to pull out hair from their human visitors and use it as floss. They have also been observed flossing with coconut fibers or twigs, and mothers have been observed showing children how to do it properly.

Despite being introduced at the beginning of the 19th century, tooth flossing didn’t catch on right away. Victorian’s were more interested in using fancy toothpicks rather than touching their teeth. Gold and ivory handled toothpicks were a status symbol to flash after fancy dinners and the Victorians loved knick-knacks. It wasn’t until the mid-20th century that flossing became more widespread and that was due entirely to the high price of silk in the United States and Canada. It wasn’t cheap. During World War II it was especially precious and conserved as a strategic resource.  Right after the war, Dr. Charles C. Bass, known in the USA as The Father of Preventive Dentistry, developed nylon floss, noting that it was more elastic and durable than silk. After the war, the daily ritual of flossing teeth went mainstream across the Western Hemisphere and then all over the world.

Tooth floss is still made of nylon, but now there’s a lot more options including dental tape, waxed floss or woven floss. There are pre-threaded floss picks and floss threaders for orthodontic patients; there are even devices that floss your teeth with water or compressed air.

All in all, it doesn’t much matter what you use to floss, what matters is that you do! Correct daily flossing can make all the difference in your oral health and is one of the simplest ways to prevent tooth decay. So, since human beings have been cleaning between their teeth for centuries, all we have to say is keep up the good work, and floss on!

Biodegradable tooth floss products clean teeth and give consumers some peace of mind knowing they are helping the environment.  All-natural floss is biodegradable and becoming more popular in the marketplace. The threads are designed to be strong when you need them but to break down rapidly and not harm the planet.  Several environmentally-friendly alternatives to nylon floss  exist today that produce almost no waste. A floss pick is a disposable oral hygiene device generally made of plastic and dental floss. The instrument is composed of two prongs extending from a thin plastic body of high-impact polystyrene material. A single piece of floss runs between the two prongs. The body of the floss pick generally tapers at its end in the shape of a toothpick. There are two types of angled floss picks in the oral care industry, the ‘Y’-shaped angle and the ‘F’-shaped angle floss pick. At the base of the arch where the ‘Y’ begins to branch there is a handle for gripping and maneuvering before it tapers off into a pick.

Floss picks are manufactured in a variety of shapes, colors and sizes for adults and children. The floss can be coated in fluoride, flavor or wax. In 1888, a practitioner named B.T. Mason wrapped a fibrous material around a toothpick and dubbed it the ‘combination tooth pick.’  In 1916, J.P. De L’eau invented a dental floss holder between two vertical poles.  In 1935, F.H. Doner invented what today’s consumer knows as the ‘Y’-shaped angled dental appliance, the schematic pictured to the left.  In 1963, James B. Kirby invented a tooth-cleaning device that resembles an archaic version of today’s F-shaped floss pick. In 1972, an inventor named Richard L. Wells found a way to attach floss to a single pick end.  In the same year, another inventor named Harry Selig Katz came up with a method of making a disposable dental floss tooth pick.  By the end of 1980’s, floss-picks became mass marketed in many different shapes and sized disposable appliances.

Read Another Great Article:
Dental Care for Baby Teeth →
Some Things You Should Tell Your Dentist →